It is common when talking about the influence of the world map for people to invoke an episode of the much celebrated US television series West Wing. The appeal of this series lay partly in the way its director Aaron Sorkin’s was able to tie together events on the world stage with the personal lives of those at work in the office of the President. He mixes a Seinfeld love of the ordinary with a Star Trek adventure of empire.

Episode #38 is one of the classics. ‘Somebody’s Going to Emergency, Somebody’s Going to Jail’ is set in the carnival atmosphere of ‘Big Cheese Day’ when lobbyists are granted access to key decision makers. White House Press Secretary CJ Cregg is assigned the Cartographers for Social Equality, which she dismisses as an empty duty, ‘I won’t really be listening to them’. 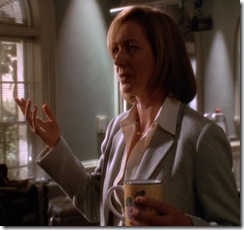 The scene is set up as an amusing diversion from the stress of world affairs. The cartographers appear typical of the earnest myopic NGOs that flood the White House on this day. Her colleague Josh Lyman appears impatient, and says to CJ as he leaves, ‘These guys find Brigadoon on that map, you’ll call me, right?’ But when presented with the corrected Peters Projection of the world, CJ begins to listen carefully. When this map is then rotated with the south at the top, CJ objects that it isn’t right. And when asked for a reason why, she can only say ‘Because it’s freaking me out.’

The other story line concerns Deputy Communications Director Sam Seaborn who is trying to obtain a pardon for a friend’s grandfather, a White House staffer who was convicted during a McCarthy purge. By the end of the show, Sam faces the difficult realisation that the initial charges were actually true, he was a Soviet spy. Shattered, he says, ‘It’s just there are certain things you’re sure of… like longitude and latitude.’ His colleague quips, ‘according to C.J., I wouldn’t be so sure about longitude and latitude.’

So Sorkin brings to together the seeming light-hearted line about turning the world’s map upside down with a revolution in someone’s moral outlook on the world. He offers no resolution to the north-south orientation, but uses its seeming arbitrariness to question our pre-determined ideological world views. While the cartographical question plays a subsidiary role to the main plot, episode #38 does demonstrate its power as a ‘natural symbol’ for the particular world order that we inhabit.

Above is the second appearance of the Cartographers for Social Equity. You can see the first appearance here, but it is also worth looking at a serious take on this episode here.