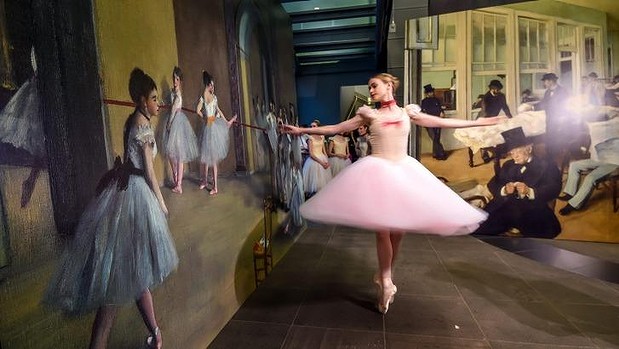 The global response to the 13 November Paris terror attacks have been understandably focused on its tragic impact on the lives of its population, on both those directly targeted by the terrorists and those who will fall victim to the increased fear that ensues. Some critical responses have attacked an exceptionalism that elevates the suffering of a European centre above more regular terrorist tragedies that occur in the South. What has not been commented on is the underlying affection the world holds Paris, not just as a privileged rich Western city, but also as a place of great beauty. With some distance from the tragic event, we can reflect on this romance, felt particularly intensely in a place far distant from the centre.

One of Melbourne’s contributions to the expression of global solidarity was the projection of the tricolour onto the edifice of the National Gallery of Victoria – International on St Kilda Road.

This was followed a few days later with the announcement of the Winter Masterpiece program for 2016 – an exhibition of French impressionist paintings Degas: A New Vision.

NGV Director Tony Elwood emphasised the scale of the exhibition: “It’s the most complex exhibition that the NGV and Art Exhibitions Australia has ever embarked upon”. Curator Ted Schell pointed out the connection with the Paris attacks:   “He’s the quintessential artist that expresses the essence, the life, the freedom, the joie de vivre of Paris in the late 19th century and we need that message to be carried, especially now after the tragedy of last weekend for poor Paris.”

The Paris attacks have raised a question about Melbourne’s position in the world. As an international city, it rightly joins others in the expression of solidarity with the citizens of Paris. But it also joins other cities at the bottom of the world in wanting a bit of Paris to itself.

Buenos Aires claimed the title ‘Paris of the South’ by modeling is central Avenida Cordoba on Baron Haussman’s urban design of the Champs-Elysees. Melbourne has the more modest claim of the ‘Paris end of Collins Street’, but it also has a romantic attachment to Paris in its unconscious. While its artistic heritage springs from the studios of Montmartre, intellectually its ideas are framed by the pantheon of French intellectuals, Barthes, Foucault and lately Rancier.

Winter Masterpieces is the most visible sign of this. Melbourne’s winter affords the opportunity to wear European clothes and become immersed in its grand art movements.  The program began in 2004 with Impressionists: Masterpieces from the Musee d’Orsay, followed by Dutch Masters, Monet, Dali, Art Deco, Picasso, Napoleon and last year the Hermitage.

There may seem nothing noteworthy in this. It is typical of middle class taste as found anywhere. But it’s particular significance for Melbourne has been revealed in a new Australian film.

Dressmaker has received a very warm reception as the latest instalment in a lineage of films including My Brilliant Career, Wake in Fright and Muriel’s Wedding. The plot involves a daughter returning to the small country town of her birth to deal with the trauma that caused her to leave – the claim that she had killed a boy.

The film makes much of the gothic scene of the remote Victorian town. Most of the trees are dead and the soundtrack is haunted by crows. The town’s inhabitants are seen as mean-spirited and provincial. The policeman Sergeant Farrat takes a fetishistic delight in the garments that Tilly Dunnage has brought back from Paris. He swoons over Dior and reveals his secret proclivity for cross-dressing.

But the power of the film is particularly in its casting. The presence of US megastar Kate Winslet as the returning daughter casts a stark shadow over the pathetic comic characters of Dungatar. Judy Davis plays her mother whose athletic feistiness shows up the dullish-nature of her neighbours.

Like Strictly Ballroom, the romantic interest is only found on the margins – in this case Teddy McSwiney from a poor family in the town camp. But the film exceeds its comic remit by consigning the whole town to flames at the conclusion. The haughty devastation brought on by Paris-trained daughter brooks no sympathy for the inhabitants whose lives are ruined, nor thought for the history of the town is extinguished.

The film ends with Tilly Dunnage on the train, approached by the conductor who asks where she is going. ‘Paris’ she says wistfully. Unperturbed, the conduct recites, ‘Hmm, well we stop at Ballarat, Broadford, Bacchus March and Melbourne’. Dunnage looks at him blankly. ‘Melbourne, then’.

Here then is the quintessence of Melbourne exceptionalism. It’s Paris end of Collins Street marks a distinction from the embarrassing ‘country towns’ that it finds company with at the end of the world. Here is the divide too readily exploited by reactionary voices that accuse the ‘latte set’ as out of touch with ordinary Australia. Is it possible the rapidly decreasing ‘ordinary Australia’ ends up as a myth, used to make those in its metropolitan centres feel closer to the north?

While Dressmaker does present a zero-sum game between French and Australian cultural pride, the final solution adopted in the conclusion is so extreme that it can serve to awaken some consciousness about local identity. The wish to destroy your own culture does seem the height of ‘bad faith’ (or indeed mauvais fois). The ever more dramatic negation of Australianness does seem to confirm its resilience. Indeed, why else are we still here?

I must confess to some discomfort in writing this post. The call to cultural pride in the face of foreign influence has a particularly nasty face in contemporary Australia, with the rise of neo-Fascist groups like Reclaim Australia that demonise Muslims. In today’s Australia, it’s hard to find expression of cultural pride that is sophisticated and cosmopolitan, rather than jingoistic or reactionary.

Maybe, in the end, that’s something Australia can learn from France, where national identity is tied to ethical values forged during the Enlightenment and subsequent revolution. Maybe Australia needs to be more French in order to dream less of being French.