Jean Renat Anamah is a dancer based in Mauritius. Dance is a powerful language of identity in an island where Asian, European and African cultures collide. Ahamah’s dance includes elements of the creole Sega, Indian classical and even tango. 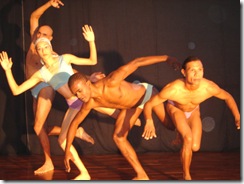 But this mixing of genres makes it difficult for Ahamah’s dance to find a place in Mauritius. There is official support for Indian and French culture in particular, but not so much for their combinations. Like many Mauritians who fall between the gaps, Ahamah has been active in creating spaces for new forms to emerge. He established his own dance company that recently performed "Feu De Paille”.

But they need support to keep going. As Ahamah writes to me, ‘We are in "Urgent" need to move on professional stages, as we are in danger to collapse and faint if we stuck in an inappropriate situation.’ Please leave a comment if you’re interested in making a connection for this dance group.

4 thoughts on “Mauritian dance mix looking for a haven”