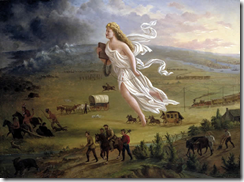 The History of the World travels from East to West, for Europe is absolutely the end of History, Asia the beginning. The History of the World has an East… for although the Earth forms a sphere, History performs no circle around it, but has on the contrary a determinate East, viz, Asia. Here rises the outward physical Sun, and in the West it sinks down: here consentaneously rises the Sun of self-consciousness, which diffuses a nobler brilliance.

In exploring ideas of South, one is wary of ascribing any essential meaning to the nether regions. After all, South is a purely relative term. It is not a specific place, so much as the direction in which to look. So South in the Northern Hemisphere is associated with the sun and warmth, whereas precisely the opposite holds in the Southern Hemisphere.

But there are other directions that seem to have a more natural meaning. No matter where you are in the world, the sun always sets in the West. In ‘Western’ culture, traditional forms of understanding such as the Bible have identified the East as the source of history. It was the mythical location of the Garden of Eden, from where mankind emerged. In the modern era, the focus shifted more towards the future, where the sun was travelling. So Hegel invoked the travel of the sun to underpin his history of the Idea, which began with the Greeks and then travelled West to Europe. This reached its apotheosis in the New World, with the West as the limitless land of opportunity in which the nation’s manifest destiny might be found (see Ken Burn’s documentary West, episode ‘Geography of Hope’).

So where is the South in this? Put yourself looking West, towards the setting sun. There on your right is North. And South?

Right and left have a natural incline of meaning in themselves. Most people are born right-handed. It is the norm. Those favouring the left are abnormal, ‘sinister’.

So far, I haven’t come across any reference to this characteristic of South, being left of the setting sun. But it has an uncanny economy to it. If we look to the West, we invoke a hierarchy of North about South. But if we reverse, and face East, then South is in the superior position. Strange that Chinese maps are oriented South, whereas those in the West have North as up.

I doubt we can go much further along this path. But it is in the nature of this journey to map the dead-ends as well as the breakthroughs. We may well return to this point coming from a different direction.