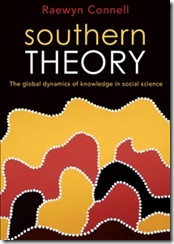 The idea of South contests a universal truth based on colonial interests. This universal truth is the target of a recent publication by Raewyn Connell titled Southern Theory.

Connell presents a variety of sociological thought that emerges outside the ‘metropolitan’ centres. This includes the economics of Argentinean Raul Prebisch, the psychology of Indian Ashis Nandy, the anthropology of Mexican Néstor García-Canclini and the philosophy of Beninese Paulin Hountondji.

Naturally, most of these writers are critical of the effect of colonisation and its more recent expression in neo-liberal economics. But it is interesting that Connell resists a relativist position, where theory would be seen as inevitably limited by its position of enunciation. For Connell, sociological truth and generalisation remains key to the discipline. However, truth for her is not an abstract theory that is seen to transcend context. She advocates instead for a ‘dirty theory’:

The goal of dirty theory is not to subsume, but to clarify; not to classify from outside, but to illuminate a situation in its concreteness. And for that purpose – to change the metaphor – all is grist to the mill. Our interest as researchers is to maximise the wealth of materials that are drawn into the analysis and explanation. It is also our interest to multiply, rather than slim down, the theoretical idea that we have to work with. That includes multiplying the local sources of our thinking, as this book attempts to do. (p.207)

While open to competing voices, Connell is keen to abide by the key elements in the discipline of sociology: ‘investigation, corrigibility, generalisation and the growth of knowledge’. However, this methodology should be underpinned by a compassion based on the inherent story of loss that pervades the South.

This does raise a difficult question. To what extent should the South be portrayed as a ‘victim’ of history? While the overwhelming evidence would seem to support the story of persecution, it can lead to a position for the South as an essentially passive agent in history. Perhaps it is maintain an openness in compassion to different perspectives, including potential for attributions of cowardice and complicity.

Connell’s own ‘compassion’ does lend her book a particular charm. Rather than take a universal position herself, she chooses to identify as an Australian. In particular, she articulates a deep connection with the landscape of the Hawkesbury river, north of Sydney, with its story of dispossession. This connection to place does surface when she contests a bad rap pinned on Australian fauna by Indian writer Vandana Shiva:

The arbitrary character of Shiva’s text is curiously revealed, for an Australian reader, by her discussion of eucalyptus trees. Here Shiva converts a perfectly valid argument against monoculture of exotics in India into a denunciation of eucalyptus trees themselves, which seem to epitomise the grasping, masculine, anti-life forces that Shiva hates. She does not seem to know that eucalyptus is not a ‘single species’, but a very large genus with more than 500 varied species, beautifully adapted to the different environments across Australia, and must loved in their native places. (p.176)

Most importantly, Connell’s book does help lay the ground for a field of knowledge that takes its perspective from the South. She notes that obvious commonality of theme shared between debates about African Renaissance and colonialism in Latin America. This leads to a call for greater south-south exchange:

It is possible to reshape the circuits through which social-scientific knowledge moves, to modify — since we cannot quickly end — the metropolitan focus. The intellectuals of rich peripheral countries such as Australia, and of the privileged classes in countries like Mexico, Chile, India, South Africa and Brazil, have significant resources for intellectual work and the circulation of knowledge. (p.228)

This is a significant challenge. It goes against the flow of money and prestige associated with northern centres of learning. But as a challenge, it promises to enliven intellectual and social activity.